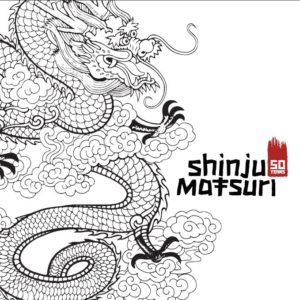 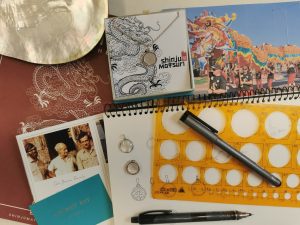 The design of this lustrous mother of pearl and sterling silver pendant is inspired by the scales of the Shinju
Matsuri dragon affectionately known as ‘Sammy’.

Sammy the dragon has opened the festival from it’s inception, during which he is enticed by the ‘Pearl of
Wisdom’ carried before him as a symbol of the dragon’s search for wisdom and the beautiful pearls of Broome.
Traditionally dragons are a symbol of power, strength, and good luck. Mother-of-pearl shell is commonly
believed to attract prosperity, offer love and give protection from negative energy.

Shinju Matsuri rekindles the excitement and romance of Broome’s early days of being a world-renowned
producer of South Sea Pearls. This unique multicultural population of pearl industry workers joined with the
local Aboriginal people and Europeans to work on up to 400 Pearling Luggers that sailed out of Broome.
From adorning the very first Shinju Queen in a crown of pearls, Cygnet Bay Pearl Farm has supported the
Shinju Matsuri Festival of the Pearl from it’s very beginnings.

Celebrating their own milestone of 75 years in the pearling industry this year, Broome’s very first entirely
Australian owned and run Pearl Farm – Cygnet Bay is proud to still be working alongside this iconic festival
celebrating the industry upon which Broome was built.

Cygnet Bay Pearl farm is now run by the 3rd generation of the Brown Family who have been pioneers of the
Australian cultured pearl industry for decades. Their passion for pearls, Broome and the community can be
felt throughout all aspects of the business that now shares the unique opportunity for visitors to experience
a working pearl farm and the amazing Kimberley Coast on which it is situated.

Find out more about Pearls of Australia Contact Us